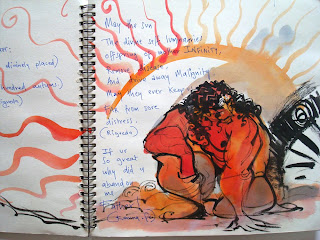 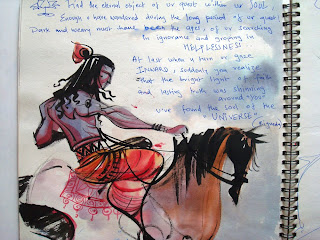 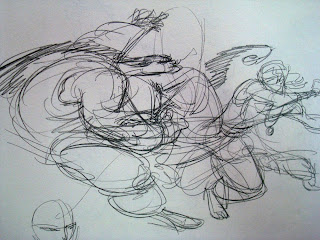 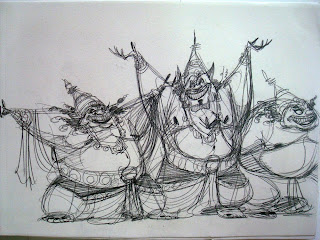 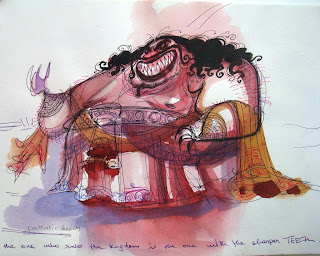 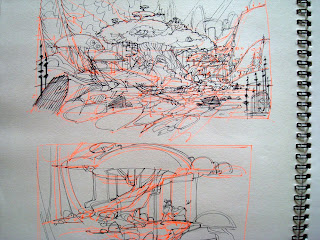 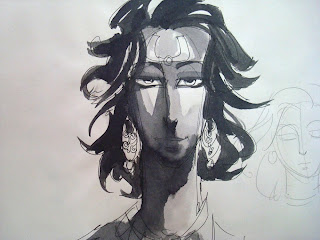 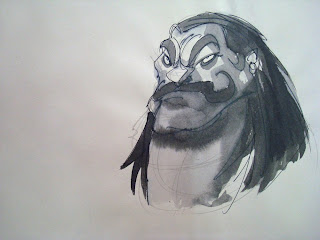 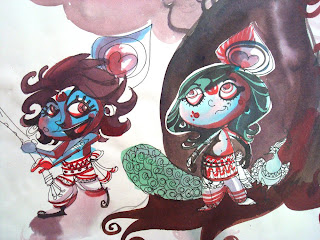 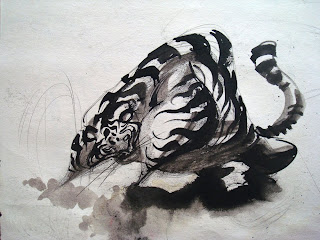 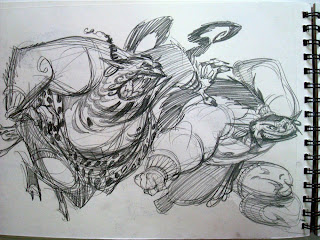 A bunch of sketches from the project,
these suggestive scribbles are the most enjoyable part of the process,
when you are trying to "Search" "Derive" and "Express"
and after the drawn moment is gone you quickly jump to the next,
unaware and uncertain of the results it's only in retrospect that you rationalize
that these random meanderings were somehow connected, like familiar strangers.
somedays you are surging with meaning, and somedays these scribbles
remind you of your imperfections ,
somedays it's anguish of not "finding"
and some days it's the happiness of "locating" a lost treasure.
these scribbles delicately hang between the fertile universe of the mind( the Idea)
and the final deliverable asked by the material world(book or a film)
at times i wonder,
that we are nothing but scribbles of someone 's thought
placed on the vast canvas of life,
trying to become something and eventually nothing again.
Posted by abhishek singh at 2:39 PM

Your gift is transcendent.

I am really glad that I began my early morning meditation with your work this morning.

You are officially my Guru.

Superb ! I hope your sketchbook is on the way to the printer as well ! keep us posted !

These sketches are very cool Abhishek!I am sure it will very interesting film!:o)

hi, discovered your blog and think your works are full of inspiration really love them.compliments!

These are beautiful-- they need to be in print. I got chills when I read the words that accompany the illustrations... very powerful and inspiring.

your work is absolutely stunning.

thanks everyone :)
THANKS ton:)

as amazing as it is to see ur finished art, its just as cool to see ur explorations and process.

the landscape shot is just amazing.love the location design. a preview of the city of madhurai, perhaps?
the motion-scribbly fight is also lovely to see!
cant wait for the end results!

These pages are amazing!

Gorgeous! I love them! I have my favorites though, the 4th and the 6th from top:)
I generally want all my final artwork to mimic what's there in the roughs and it just doesn't, somehow.
And I almost make it into the first 15 to comment:D

Beautiful work as always! Love checking out your work!

Wow you have designs are amazing! so much lineflow, great great designs! i'm pretty much speechless! It'll be exciting to keep up with your work!

THANK YOU ALL:)
for all the love , patience and support:)

Wow! amazing artwork in your blog!! love your style!!
cool character designs as well.
thanks for sharing!!
:)

You hold us all in the palm of your hand. It always feels like wonderland to wander through your work.
Thank you for sharing the magic with me when you last came down here! xoxox

All the very best :)

These pages are wonderful!! So much expressiveness and energy!

Thank you for sharing
This fabulous work with us
Good creations

Wow, you have some very striking pieces on your blogspot Abhishek! Keep up the good work!

Check out my shoe designing blogspot? All my designs are hand-drawn also! Take care x

We at Pop Culture Publishing really liked your body of work and would be interested in working with you. We are publishers of The Itch You Can't Scratch, Uud Bilaw Manus, and Random, India's Longest Running Humor Digest. We are looking for Artists, Pencillers, Inkers & Colorists For our Upcoming Graphic Fiction Projects, Including Contributors For Their Humor Digest, Random!

If You Are Interested and want to work with the freshest publishing label in India, give us a buzz at info@popculturepublishing.com with your quote and sample work.

Looking forward to a positive reply.