Have uploaded some new art and paintings on the site, do check them out and much Thanks for your support and Love.
https://www.abhishekartstore.com/ 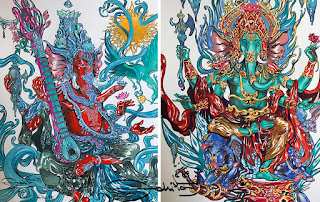 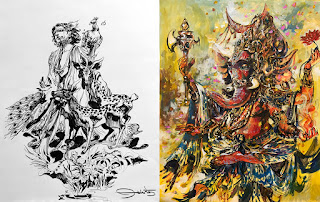 Posted by abhishek singh at 1:23 AM No comments: 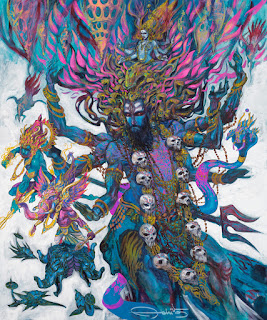 "The Blue Oscillation"
He understood what he'd always sensed that it was not the power of cosmic field or quantum vacuum which would propel them into the new world, it was the mind.
The "para-Shakti" had manifested the Mind, but how can it be so, one needed a mind at least a strand to conceive one.
-
Who manifested the mind baffled the gods, they were new in this world.
The stories they had heard of the never ending pillar of light from brahma's own sons were utterly unbelievable, they could not fathom how can something not have an end or a beginning, even their lives had finite confines.
-
A voice chanted in the the ether calling all Gods ? The voice of of Sada shiva- the one who had witnessed the eternal pillar of light, and the failed attempts to scale it by "Varah" vishnu and hams-brahma. -
The voice belonged to no man or no woman, it resonated like a thousand conchs were blown into the mahat-field of space and time, seeping into the orbits an unknown vibration.
-
The gods knew this voice came from a distant place, a place which had seen earth and it's sibling planets grow up around a draft star, which now they called "Vamana"
This voice knew them in way they didn't know themselves.
-
The voice commanded that half of the gods become "Movement" and half "stillness" the universe started to expand and contract all at the same time then…
The voice was gone, it had become part of everything, both waves and particles.
-
The leader of "spandhan- the movement" "Kartikeya" took the seekers into a circle around the cosmos finding the star gate of the primordial mind, and Vinayaka the master of stillness sat and delved deep into the synaptic rhythms to find the hidden key to open such portals.
-
They shall meet one and other in sinusoidal oscillations. It would be blue...To know where the voice and the primordial mind came from, they must listen to every atom's yearning.
-
-
-
Text : Abhi Abhiart
-
Painting size - 6ft x 4ft, acrylics on canvas.
Posted by abhishek singh at 4:30 AM No comments: