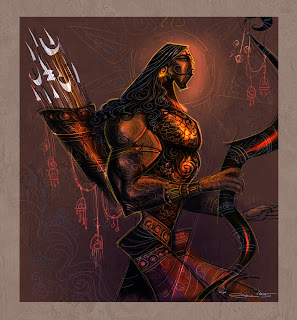 so finalee a nu post !!! it's been really long since i last posted ,
...this post is a sketch i happen to do of one of my fav cha from the epic "Mahabharat" called "Karna" he was born to kunti as a result of a boon given by the "Sun" god himself. over his life he became to signify "Selflessness" ,it's a journey of a man who's so gifted but how fate conspires against him ,it's a story of a man against himself..he's also the only one in the war who get's cremated by Lord "Krishna" himself. will post more on this soon :)

...also hav been workin on an extremely interestin project ....all underwraps but soon will share bits .i'm really excited about this one as on this project i'm doin the story too n it's been great so far.

n Thanks a lot everyone for takin time out to post in a comment ...THANKS:)
Posted by abhishek singh at 7:16 AM 44 comments: